[Select/click/tap any photo to display at full resolution it in another tab.]

‘Chionodoxa’: such an evocative word (Greek: Glory of the Snow), it seems a shame that the genus is now generally subsumed in Scilla – by botanists, if not yet by horticulturalists.

The following account retains Chionodoxa in synonymy, the practical justication being that (at least in the following species) floral characters provide very useful ID features between Chionodoxa and Scilla.

Neither native species of Scilla grows in Cumbria, although Scilla verna, Spring Squill, grows not far away on the north shore of the Solway Firth. Species of Chionodoxa and Scilla native to eastern Europe and western Asia are grown in Cumbria, and some escape, and may readily propagate on lanesides, in cemeteries, and more rarely in woodland, etc., etc. Please record these, where established out of gardens.

The most obvious difference between these Scilla and Chionodoxa is in the arrangement of the anther-filaments: in Scilla, these surround the ovary, and splay outward (so the anthers are separated from each other):

In Chionodoxa (below) the anther-filaments are very wide at the base – certainly very far from ‘filamentous’! – and narrow and converge towards their tips, so that a conical structure is formed, and the inward-facing anthers touch at their apices:

Check also: in Scilla (top picture), the tepals (‘petals’) are fully separate from each other and arise below the ovary. In Chionodoxa (below), the perianth forms a short ‘tube’ at the base before the perianth-lobes (equivalent to the tepals in Scilla) splay out. The ovary is hidden within this ‘tube’. The touching anther-filaments ‘continue’ the tube upwards.

Two similar species are Scilla sardensis  and Scilla forbesii. Both are a striking  deep blue. In both, the filaments are white (but sometimes appearing blue by reflection from the tepals), making a contrasting white ‘eye’.

Scilla (Chionodoxa) sardensis (Lesser Glory-of-the-Snow): can be the larger plant of the two, and carries up to 16 flowers per stem, though often much more stunted. The perianth-segments are blue almost to the base, where a little white may ‘leak out’ from the anther-filaments. Perianth-lobes are typically in the range 8 to 10 mm [Stace].

Some colonies (as below) can show variation in the amounts of white, and it is rarely clear if this results from hybridisation, inherent variability, or what.

Scilla (Chionodoxa) forbesii (Glory-of-the-Snow): typically has 4 to 12 flowers on a stem. The basal third or so of the perianth-lobes is strikingly white, making an obvious ‘white eye’. Perianth-lobes are typically in the range 10 to 15 mm [Stace]. 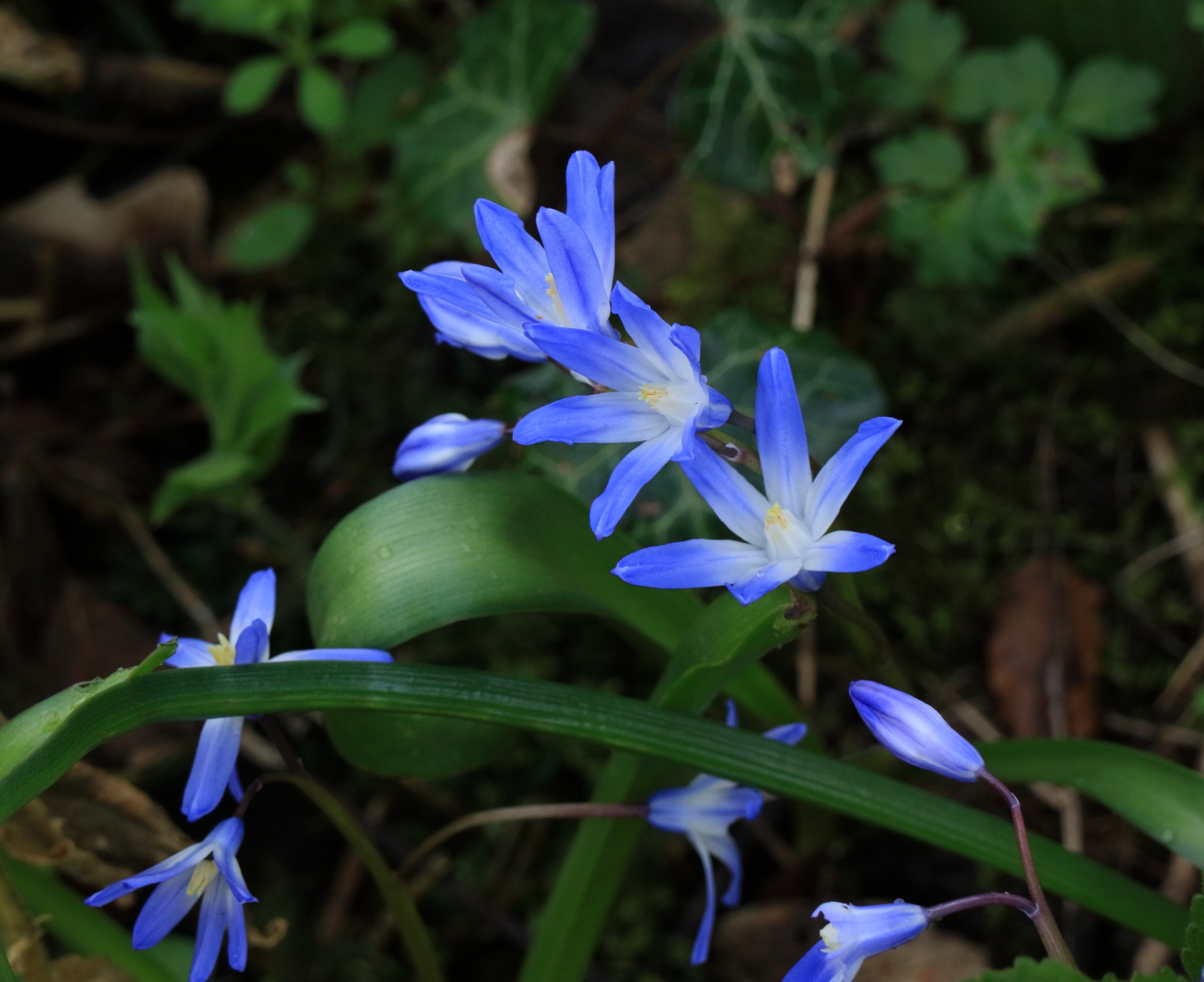 Scilla (Chionodoxa) luciliae (Boissier’s Glory-of-the-Snow): The specific epithet luciliae has often been applied to related plants. There are fewer flowers per stem – often only one or two – and these are larger (perianth-lobes 12 to 20 mm [Stace]), paler, and blue-violet rather than clear blue. They tend to be held erect. The bases of the lobes are pale, but colour gradually outwards. A very beautiful plant.

Scilla bifolia (Alpine Squill): an obvious ‘true’ Scilla on anther-filament structure and arrangement. From other Scillas: flowers lack bracts below the tepals, there are usually no more than ten flowers, and usually just two leaves (hence bifolia), or three, which sheath the base of the stem.

Scilla siberica (sometimes misspelt sibirica) (Siberian Squill): another ‘true’ Scilla, with separate tepals arising below the ovary and no ‘tube’. There are few flowers per stem, blue throughout, and these droop conspicuously, with the tepals also slightly cupping.

Other species and hybrids which may occur escape, or be dumped, ‘in the wild’ in the county will be illustrated here if/when I receive publishable photos and details!
Thanks to Dave Hickson and John Parker for drawing attention to, and discussion of, some of these plants, and Mary Traynor for the photos of Scilla bifolia.