Northern Hawk’s-beard, Crepis mollis, is a very local and declining species, with most remaining sites concentrated in the northern Pennines. (See the excellent account by Kevin Walker, downloaded from http://bsbi.org/species-accounts )

Slender forms of hawkweeds, Hieracium, continue to be taken for Crepis mollis. Let’s say from the start that these are different and distinct plants which should not be confounded: they are in different genera, after all! Crepis mollis is far from being merely ‘like a small hawkweed’: more often than not, a plant ‘like a small hawkweed’ is just that! Hieracium vulgatum, in its variety vulgatum, seems to be the form which occurs often with Crepis mollis, and in ‘likely habitats’ for that, and which most tempts the unwary.

The following table aims to clarify where the significant differences exist between the two. Further clarification and illustrations, including of Marsh Hawk’s-beard, C. paludosa, follow:

Non-flowering plants: Often well-disguised in deeper vegetation are non-flowering ‘rosettes’ – often forming ‘clumps’, the patches of basal leaves being rather untidy, rather than making neat rosettes. The spathulate shape of Crepis mollis, with broad and blunt lamina narrowing rapidly into the petiole is clear here. The impressed veining, lacking in Hieracium, is obvious. As always, the +/-entire margin is distinctive:

Lower stem leaves: are variable in shape and size, with the lowest leaves on vigorous plants being broad, blunt and semi-amplexicaul. Again, the entire margin is noticeable:

As would be expected, in more etiolated plants these leaves tend to be narrow:

Upper stem leaves: are variable in shape and size, topmost leaves being sometimes ‘narrowed-heart-shape’, with cordate and semi-amplexicaul base. A ‘longitudinally-narrowed viol’ shape, with a narrower ‘waist’, widening to rounded basal lobes, again semi-amplexicaul, is characteristic. Some may be oblong, and others narrowly spathulate, erect, and very elegant. Yet again, note the entire margin, with at most slight sinuations, or at intervals gland-tipped points: 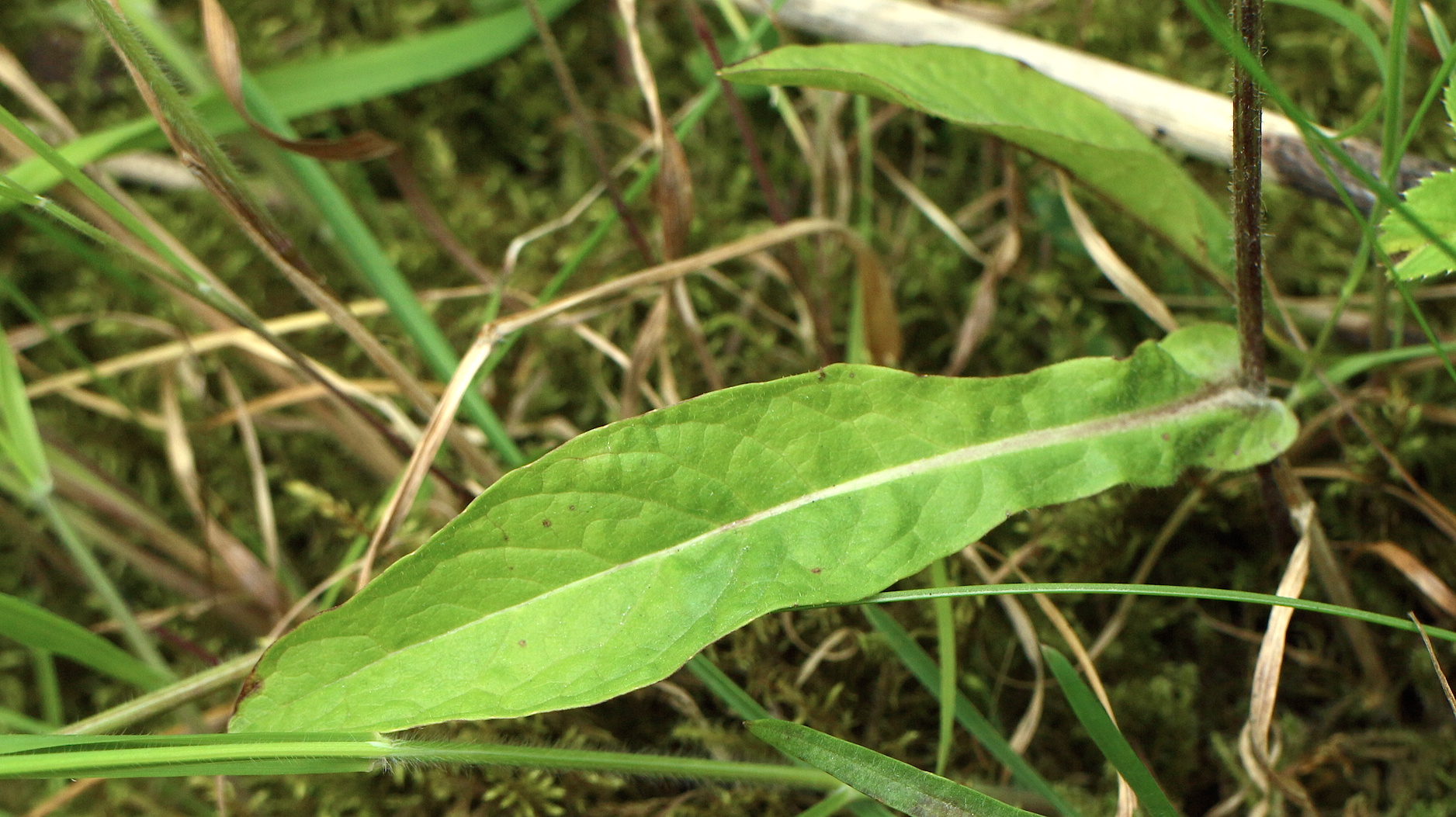 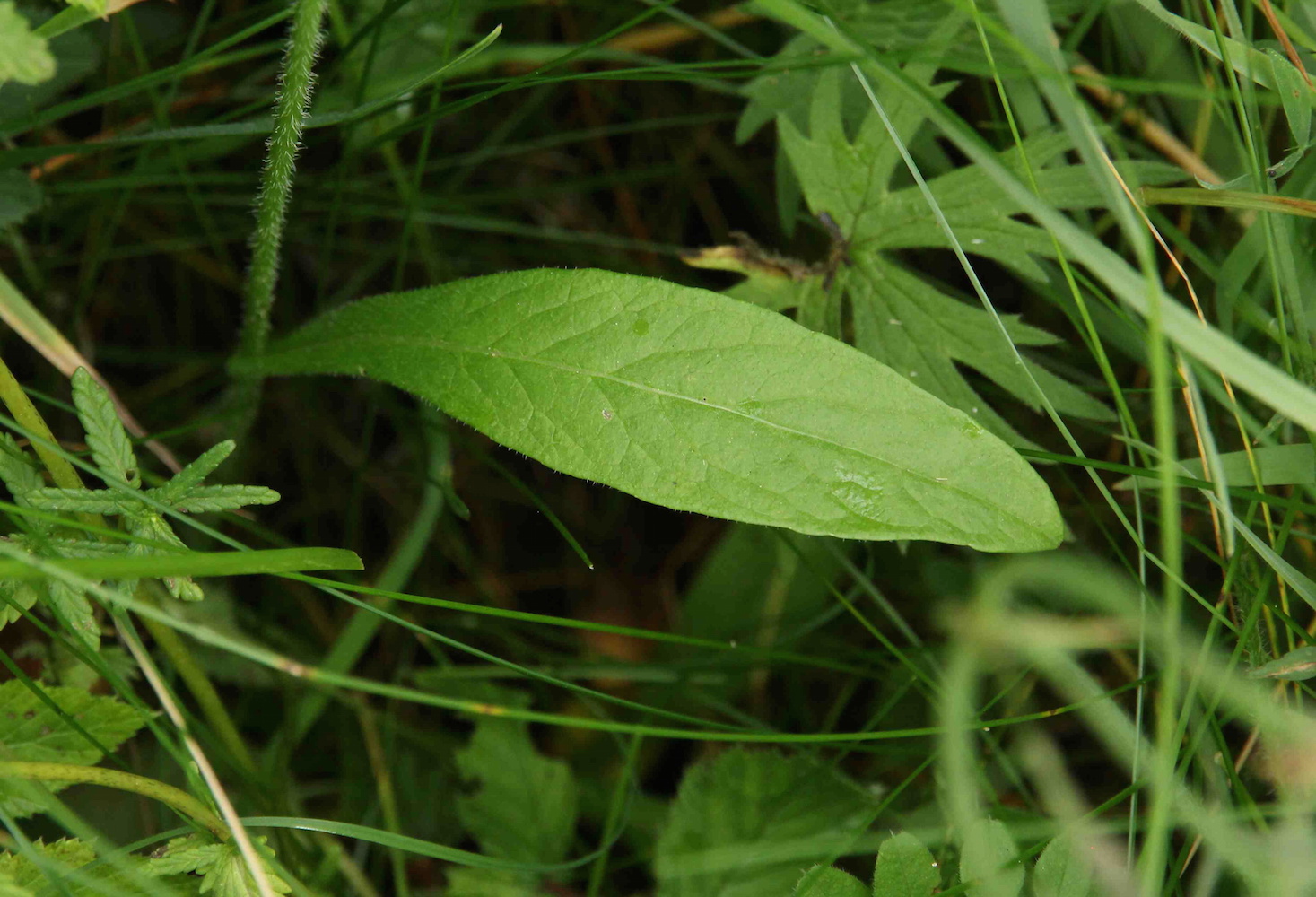 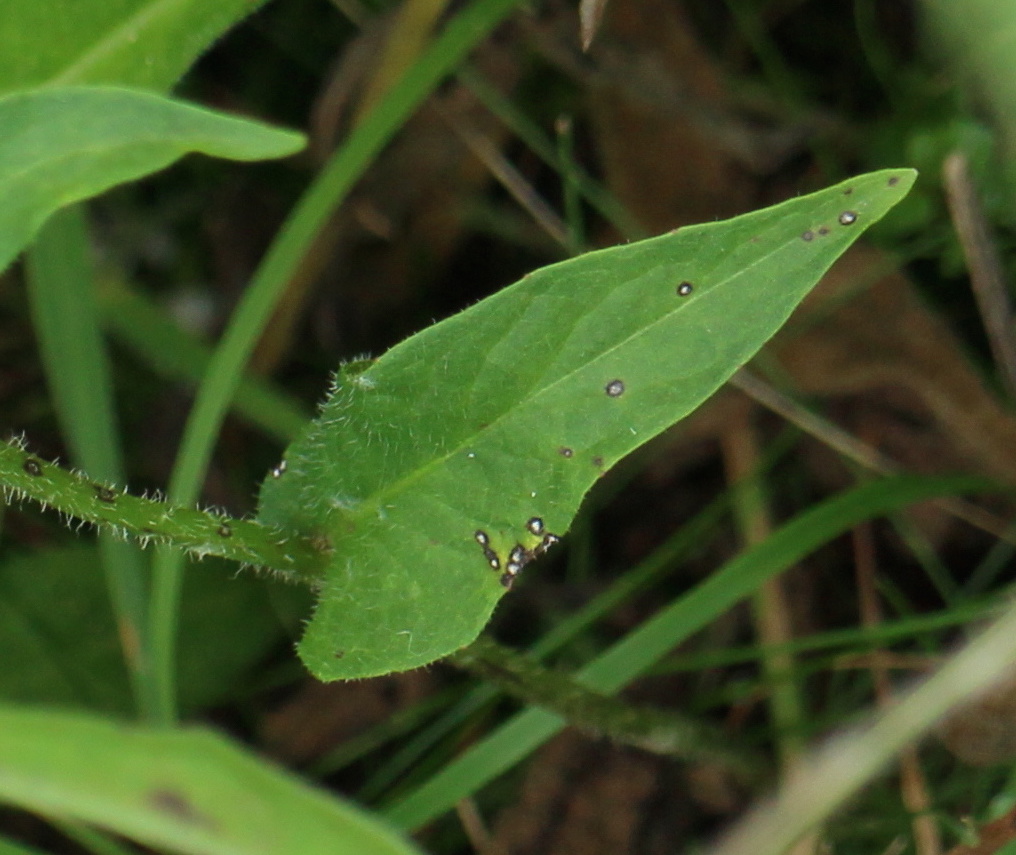 Stems: Crepis mollis has quite strongly ridged stems, which may become more conspicuous later in the season as the ridges become lined with deep purple. These ridges ascend to the capitula. (In open sites, the whole stem can tan to purple-brown.) Stems in Hieracium are not conspicuously ridged.

Crepis mollis has both +/– glabrous, and hairy (hence ‘mollis’), varieties, and many colonies have clear examples of both types. The glabrous variety has stems with scattered hairs and papillae, and leaves with scattered longish hairs. By contrast, Hieracium stems are generally more hairy, with both longer and shorter white hairs, often producing a greyish look to the Hieracium stem, as visible in the photos, and contributing to a paler appearance overall.

Inflorescence: Crepis mollis begins into flower considerably earlier than the hawkweeds, and about at the same time as Marsh Hawk’s-beard, Crepis paludosa. Its season is considerably shorter than hawkweeds, so that although one may find open flowers of Crepis mollis as late as mid-August, by this time the vast majority of Crepis plants will be in ripe fruit and many dropping seeds. Any remaining flowers appear to be the result of replacement axillary shoots after damage to the primary stems.

The appearance of the inflorescence is darker than in Hieracium, the flowers richer and buttercup-yellow (Hieracium flowers are often a paler lemon-yellow, although H. vulgatum is a deeper colour than many):

The pappus of C. mollis is pure white – indeed shining white – and this is always in striking contrast with the colour of the pappus of Hieracium, which – even with some stretch of the imagination – is ‘never whiter than off-white’, and generally a pale fawn colour. This is a critical identification feature, and at once obvious in fruiting plants:

(There do not seem to be useful distinctions between the pappus hairs of the two, although those of C. mollis are rather finer and the sharp teeth are more spaced.)

Seeds: Finally, in any ripe fruiting material, a glance at the seeds will dispel any doubts. These plants are in different genera, and the seeds have constant and distinct differences.

Those of C. mollis are clearly narrowed towards the apex (truly fusiform), and sharply and obviously ribbed, with many ribs (ostensibly 20); Hieracium seeds are cylindric, truncate at the apex, and with fewer less clearly-defined ribs (ostensibly 10). (In both, but much more so in Hieracium, some ribs are less prominent than others, so that the number of ribs can be a matter of judgement.) A difference in colour is detectable also. The ‘banana’ shape of the C. mollis seeds seems to be constant:

This is H. vulgatum var. vulgatum – the first photo below tempting as Crepis mollis: tall but slender with narrow leaves; the next rather less tempting with its stronger basal rosette and tiny stem-leaf: 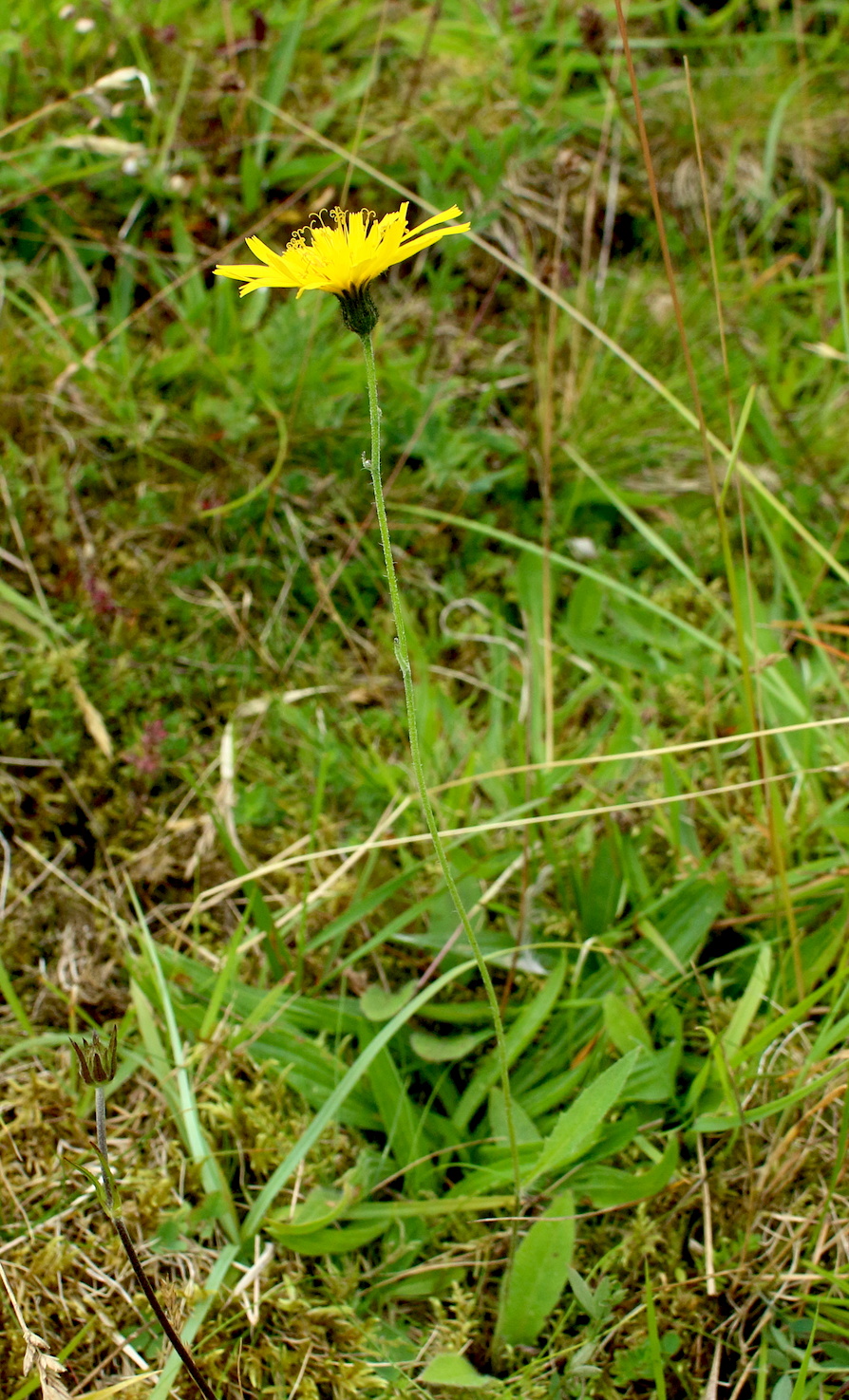 Basal leaves: long, bristly hairs; flat lamina, with acute tip and teeth in the basal half: 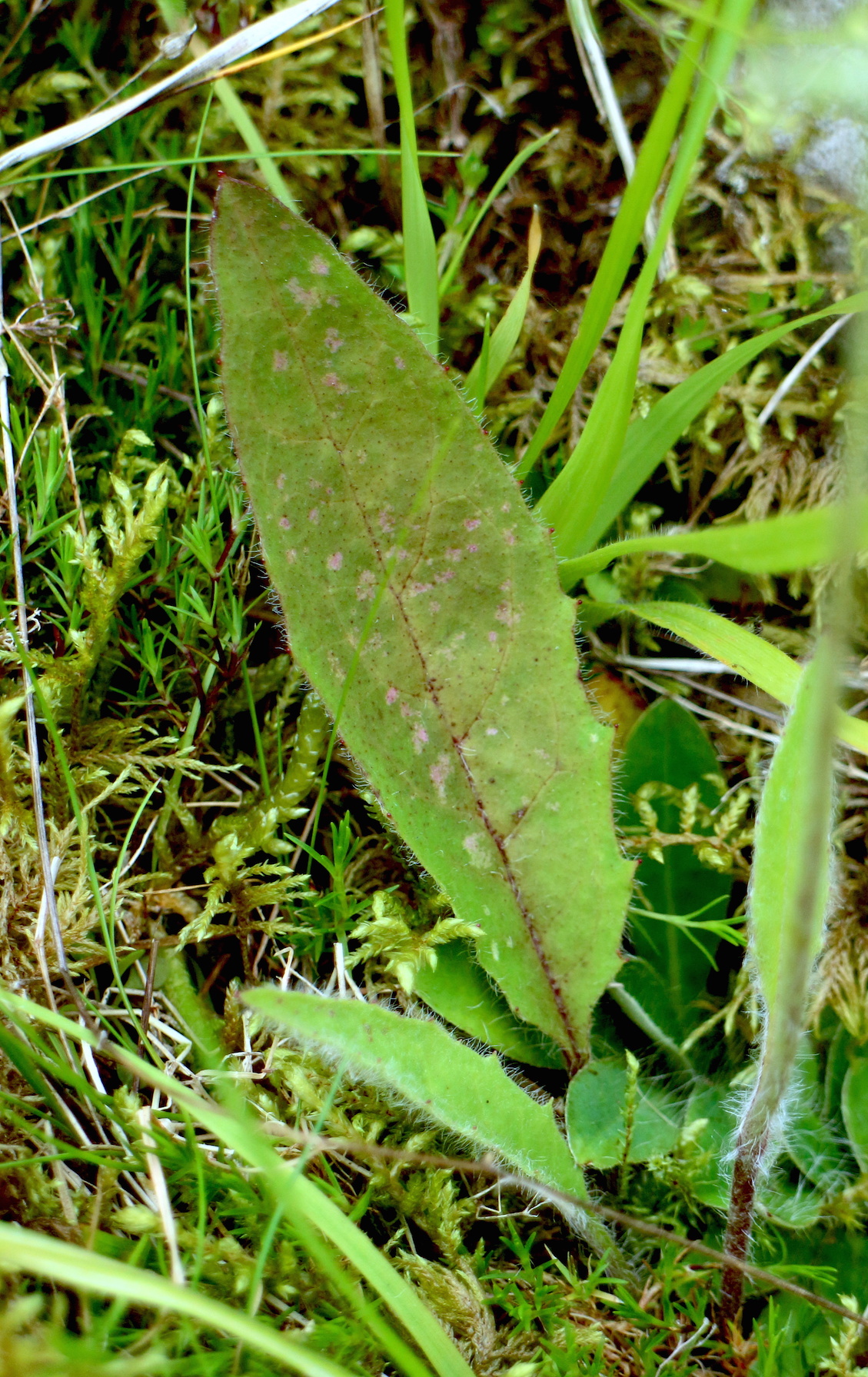 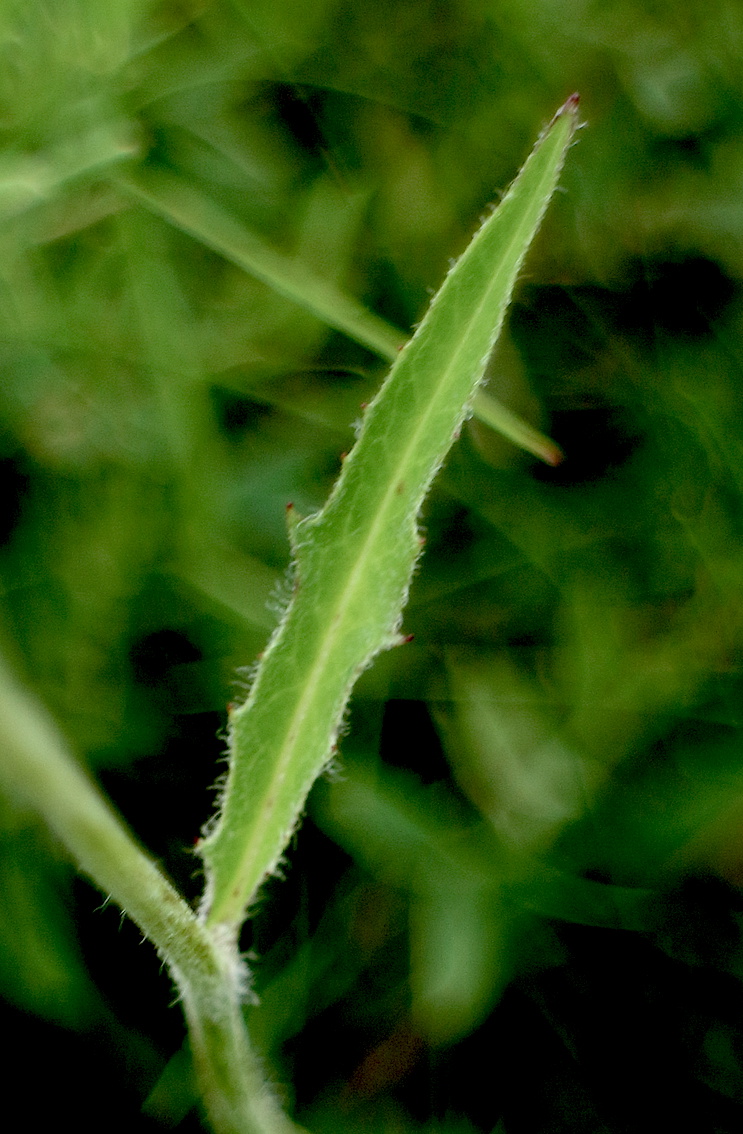 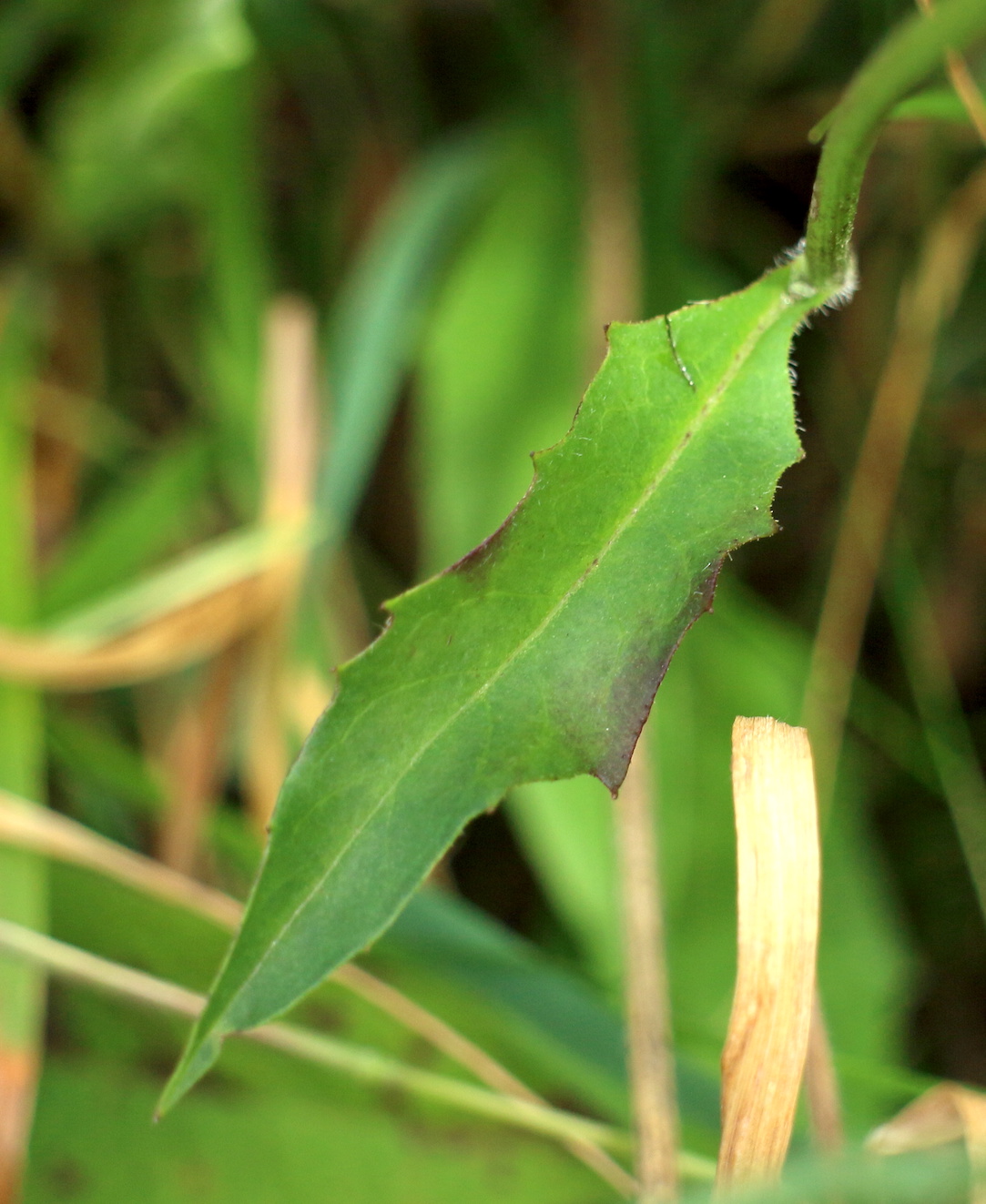 In its weaker or more etiolated forms, this can be quite similar to Crepis mollis, with semi-amplexicaul leaves, and similarly dark heads and golden-yellow flowers.

Readily separated, however, by its generally wider and strongly clasping leaves with well-marked toothing along the margins, especially towards the base, and in particular in fruit by its buffish pappus (similar in colour to Hieracium):

The two Crepis species often grow together – intermixed at times – although Crepis paludosa also grows in much wetter and also more shaded places, whilst Crepis mollis often grows out on open hillsides on well-drained soils.

With experience, a close view should enable certain separation of either of the Crepis species, from each other and from Hieracium, with several key differences to establish the identification.

Thanks to Brian Burrow for identification of a hawkweed specimen from Garrigill – typical of the forms which tend to accompany Crepis mollis. Phill Brown contributed photos and many useful comments on our sorties to look for these plants.