Suggestions on how to record an area

In general, the B.S.B.I. urges recorders to make lists within individual monads (see below for explanations on terms). However, tetrads are still very useful units for rationalising one’s day in the field. We would aim to have, by the end of this recording round, a good list of plants, from several hours of recording across the area, for at least one of the four monads in each and every one of Cumbria’s 1781 tetrads.

A good plan, having chosen (or been allocated) a tetrad, is to judge by careful consideration of the map, or by viewing on the ground, or from previous experience, which monad is likely to be the most productive in that tetrad (productivity measured in terms of maximising one’s final count within the available time constraints). Perhaps the chosen monad promises to supply the widest range of habitats, for instance, but many other factors such as accessibility, footpaths, open access land vs. private land when the owner is unknown, etc., also will play a part.

On the day, spend a good proportion of the time in the chosen monad. You will often find after some hours that the discovery rate of new plants for the list decreases, and you appear to have adequately covered the range of habitats available. If your time is now running short, then aim to move into other monads in that tetrad, perhaps returning to the start-point by a different route. Start a new monad list, but only with the additional species you encounter: this will expand the tetrad-list, whilst saving much time. With ample time, do make fuller lists of each monad you visit, but be aware that time spent re-recording the abundant species may be less valuable than covering more ground in a new monad, perhaps revealing new habitats. (‘Covering the ground’ also enables you to get a better sense of just what is available in that tetrad, so that other areas can be targeted if or when you revisit, perhaps at a different season.)

If time and energy allow, start a whole new tetrad. In a long day out, it can be possible to get good lists in two tetrads after (say) three or more hours in each, and perhaps with lists from more than one monad in each tetrad.

If the ground is ‘poor’ but relatively easy going, with a restricted range of habitats – such as in larger areas of open high Pennine moorland plateau, very energetic/motivated individuals may be capable of amassing useful lists in more than two tetrads in a day, dependent of course on many factors – considerations of access, convenient arrangement of tetrads close to, or straddling, access routes, careful planning (including escape route if the day has to be curtailed), altitude gain, weather, keepng a close eye on the passage of time, and so on.

At all times, personal safety must be paramount, and that demands careful and thorough planning – a clear recognition of one’s physical strength, limits, and endurance (and that of any companions); absolutely essential clothing for all-too-likely vicissitudes of the Cumbrian weather; more-than-adequate water and food (emergency rations on top of that!); the likely hazards in habitats to be visited… and more.

Expeditions into remote areas of mountain and high moorland are certainly possible for single recorders if experienced, equipped, and fit, but the inherent increased risk for the single individual must be acknowledged and understood (appropriate notes left as to anticipated routes and objectives, etc., the ability to navigate in any conditions with map and GPS devices, and with the likelihood of no phone signal in the event of accident). All these considerations must still apply even with companions: whilst the risks for the individual may be reduced, any party’s day out will always be constrained – and potentially compromised – by the least capable, least prepared, least well-equipped member.

A hectad is a 10km × 10km square of the Ordnance Survey National Grid.

These are the hectad designations for the county: 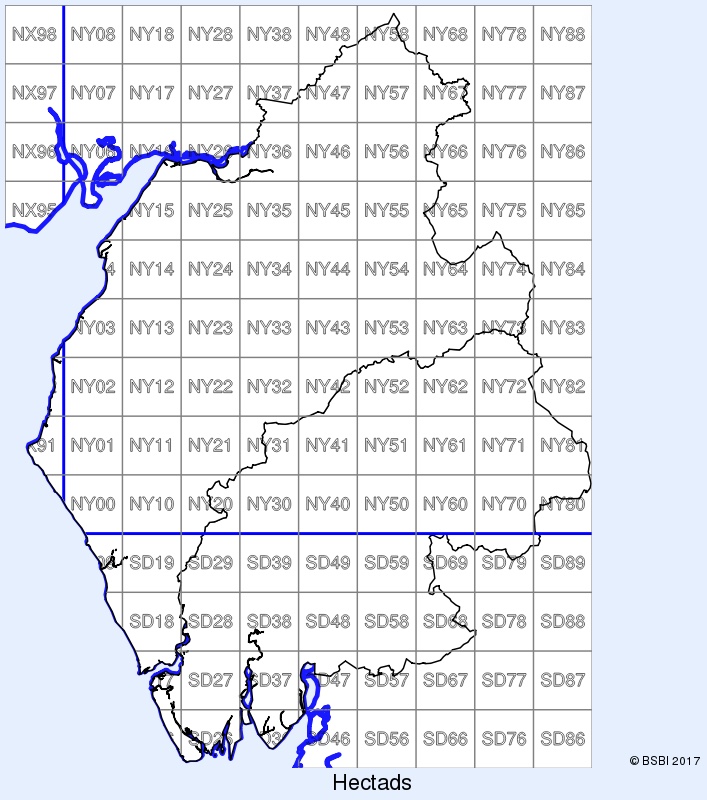 A tetrad is a 2km × 2km square of the Ordnance Survey National Grid. Tetrads are much-used recording units in field-botany and for other classes. A Flora of Cumbria (1997) uses tetrad dots on its distribution maps, as do many other similar works.

We previously designated a particular tetrad by means of the grid-reference of its south-west corner, so e.g. the blue tetrad in Hectad NY45, below, would be ‘NY4658’.

However, designating a tetrad by ‘NY4658’ is ambiguous, since it also refers to a monad, which is a 1km × 1km square (marked as a green square below). To avoid ambiguity, the ‘DINTY‘ designation is now used, and this is explained below (a downloadable image).

Until quite recent years we would list plants ‘by tetrad’, but as in most vice-counties we now list almost exclusively by monad, which at once gives a four-times better resolution to the data.

All the more abundant species can be recorded simply by monad, but any more interesting, scarce, or rare species are recorded by 6-fig. GRs, or (better) by 8-fig. GRs, these days usually using GPS apps. on phones or tablets. More detailed notes, such as on habitat, population sizes and extent, evident or apparent threats to the plant at the site, and so on, are always extremely valuable. 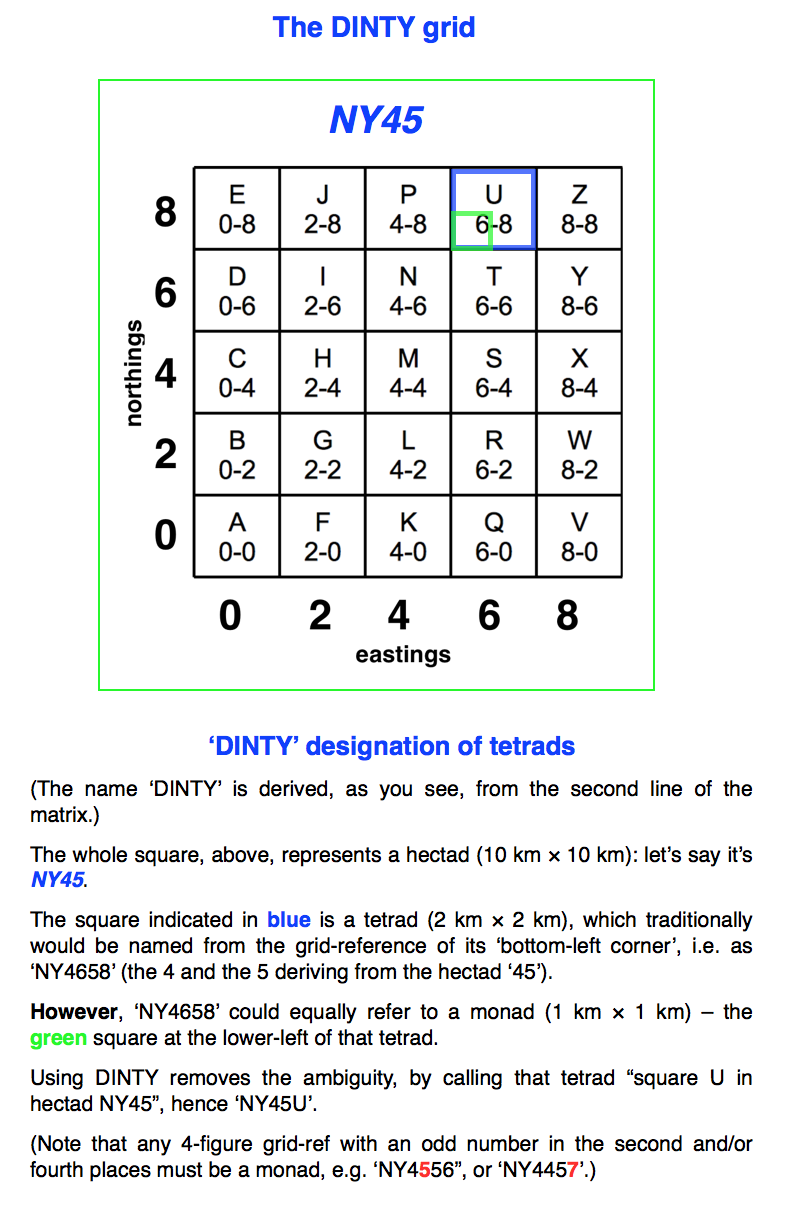 [⇠⇠ Back to Recording Cumbria’s Flora…]